< Previous Entry Next Entry >
It's been a while since my last blog entry and that is mostly down to the volume of time (and money!) that has gone into preparing for my upcoming Australian Landscape Photography Exhibition. I'll talk briefly about it and then get onto a trip report for the last few images.

During the whole of September 2018 I'll have some of my work on display in the Bendigo Bank Central Arcade in Bendigo. There should be three large framed prints, including one at 60 inches wide (plus mat & frame) of Craigs Hut under snow that looks truly glorious if I do say so myself. We'll also have a dozen or so 36 inchers on display, all professionally roll mounted on foam core and matted, as well as maybe one canvas if we can fit it all in. The work has been hand titled and signed and will be available for sale. Just shoot me an email or call if you'd like to purchase anything on display.

So if you're reading this and can do me a favour, please give a shout out to any family or friends who might be interested be it via social media or otherwise. I'd really appreciate the support. Bendigo is about 2hrs from Melbourne and certainly worth a day trip. Here are a couple of shots of us building display shelves. 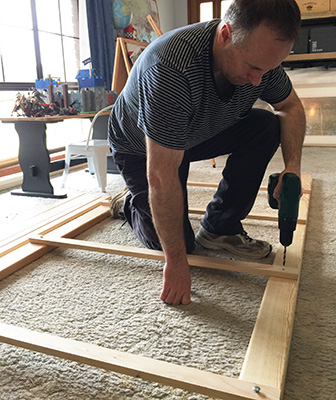 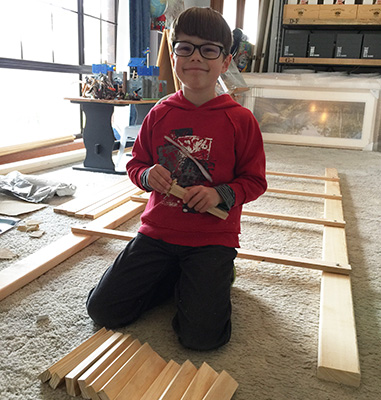 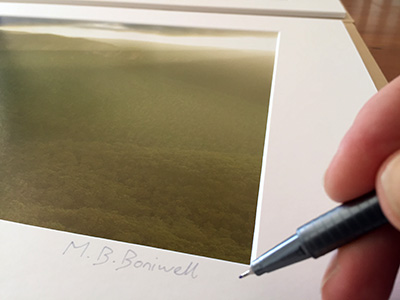 Right, with sales pitch out of way, I'll offer some commentary on my last few photographs. The first image captured in this series was that of Mt William. The inspiration came from attempting to find a view point my father and I had searched for some 40 years ago. Reminiscing about all the great memories he'd given me I wanted to finish the job for him. I tried a pre-dawn foray from the south and failed, so returned a few weeks later and instead approached from the north, this time not only discovering a great vista, but capturing it in rich golden hues. Had Dad been there, he'd have been sharing his thermos of tea and pieces of fruit cake, with a big smile.

Sometime after that I made a few local excursions picking up more images. Having strolled the shores of Lake Daylesford hundreds of times over many decades, I can attest to its charm and restorative powers. Late into autumn I found it in particularly good form and managed to come away with a lovely picture of the Boat House in the early morning light. A few people have told me it almost looks like a painting which I'm choosing to take as a compliment.

I explored more local scenes, including a woodland view at Mount Macedon discovered during a pre-dawn trek through its lush forest. I'd done the usual trick of packing up and heading for the car, when the light suddenly pierced a thin fog and exploded with brilliance and powerful golden rays. I ran back through the bracken, fought my tripod, composed madly, and fired shot after shot thinking it would disappear at any moment. Silly me. The light, if anything got better, and in the end I had several minutes to recompose more thoughtfully, coming away with a nice keeper.

On one of the many Melbourne trips needed to visit printers in preparation for our little exhibition, I managed to revisit Alfred Nicholas Gardens. It was at the tail end of autumn by then I really hadn't expected much in terms of colour, but boy was I wrong. The gardens were in spectacularly good form and so crowded with sightseers I had to wait until near darkness before I could capture the Boat House free of passers-by. Even then the ducks nearly got me by making ripples in the reflections just when I finally had the scene to myself. Waiting for calm just that bit longer did the trick and I left very happy with my efforts.

Finally, the last two images came from an extended trip up north. The Curracurrong Falls photo was something I'd planned from a previous exploration, and had based the entire voyage around catching it during a rainy few days to give the little stream a chance build up a decent overflow. When I arrived, however, I was greeted with bushfire ravaged vegetation all along the Royal National Park and worried it would ruin the shot but in the end I think it actually gives the image an edge. Fire meets ocean kind of thing. Or maybe I'm imagining that?

Lastly the shot of the series came on the way home, where a spur of the moment decision saw me hiking through deep snow at Kosciuszko, sans snow shoes, and trying desperately to find a composition before the sun set. The terrain was familiar from previous trips, but it seemed that one ridge simply lead to another and another. Finally, as golden light set the snow a glow, I came to the base of the North Rams Head.

Setting up for the photo, it wasn't long before a battle of light vs cloud began. The day had been cloudless until that point, but suddenly it rolled in, threatening to envelope my scene. Luckily the glorious sunset colour peaked moments before hand and I fired the shutter in the nick of time. Seconds later it was all over. A blanket dull grey covered all, the cold became even more intense, and visibility plummeted.

A steep downhill or two later and I was back to the chair lifts, now shut for the night. I proceeded to descend to the village and my nice warm car with a feeling of peace and contentment.

And there ends another chapter of my photography life. Hope it was of interest. The next blog will probably be sometime after the exhibition.

All the best dear readers.

Shipped from America (US $)

Shipped from Australia & US (AU $)

All images may be purchased for advertising, editorial and web use. See Stock Prices for details.
Michael is also available for Commissioned Photography assignments within Victoria, Australia.
Email michael.boniwell@gmail.com or Phone: 04 3473 0828.